Tito’s first post-war arrival in Sutjeska was on July 2, 1958. President Tito opened the new Gacko-Foča road to traffic, which was built by JNA units, and thus officially marked the beginning of the celebration of the 15th anniversary of the heroic battle of Sutjeska. During the celebration, he gave a speech, and in the evening, on the very coast of Sutjeska, in Tjentište, together with the President of the UAR, Gamal Abdel Nasser, who was on a friendly visit to Yugoslavia, he hung out with fighters and guests. 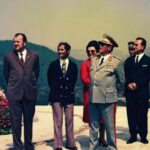 Josip Broz Tito and Egyptian President Nasser at Tientist in 1958.

Documentary film “Valley of Heroes” by Zika Ristic from 1974, which deals with the opening of the monument in Tjentiste and which focuses on Josip Broz Tito.